Disclaimer: As an Amazon Associate TechEffect earns from qualifying purchases made via links on our website.

Father’s Day is a day dedicated to all the fathers out there (obviously – the clue is in the name!), to make them feel special and honour them. It’s a day when we should stop and realize the importance a father holds in one’s life, and to appreciate everything he does for his children.

In the UK, Father’s Day is celebrated on the third Sunday of June. Similarly, the USA and Canada also join the UK in celebrating Father’s Day on the same day.

However, the actual date of celebration in other countries varies widely. So, although Father’s Day is celebrated in almost all countries, it’s not necessarily celebrated on the same day as it is in the UK.

A history of Father’s Day

Although Father’s Day was only made official in 1966, people started celebrating it as far back as over a century ago, especially in the United States. It was actually the efforts and struggle of a woman named Sonora Dodd that made celebrating it a possibility.

The seeds for Father’s Day were sown back in 1909, when Dodd attended a Mother’s Day sermon. After listening to the sermon, she began to wonder why the importance of fathers was not celebrated in the same way.

A possible reason for this thought suddenly touching her so deeply was because she’d lost her mother at the age of 16, and after this was raised and cared for along with her siblings by her father alone.

Whatever the root cause, she felt a strong desire to celebrate Father’s Day as well, and began campaigning for it. She was then supported by the local Young Men’s Christian Association (YMCA) as well as the Spokane Ministerial Association.

Thanks to Dodd’s efforts, the first Father’s Day was celebrated in cities across the US on the 19th June, 1910. However, despite all the popularity and importance the day gained, it wasn’t made official until 1966, when the then president Lyndon Johnson finally decided to declare the third Sunday of June as Father’s Day.

Since then, Father’s Day has become a public holiday in a lot of countries.

In the UK, Father’s Day isn’t a public holiday, unfortunately. However, as it’s always on a Sunday anyway, even in the UK most fathers don’t have to worry about going to work and can instead stay at home and celebrate with their children, and see them express their love for them.

Still, it would be nice if they got a day off work on their special day!

The importance of a father and fatherhood

It’s usually mothers who are thought of as being the central point of their children’s life,  and fathers are, most of the time, quietly unrecognized heroes. Despite this, both a mother’s love and attention for her child and a father’s are equally worthy – there’s no doubt that a father’s role in their children’s life is definitely extremely important.

A good father is someone who doesn’t just play a single role in their children’s life, but rather multiple ones. He’s usually someone who takes the responsibility of ensuring that there’s food on the table, as well as a secure future for his children.

He’s also the perfect caretaker when the mother’s not around, as well as someone who can be a perfect friend of his children.

In fact, if recent research is anything to go by, a father seems to be more important than a mother when building a child’s overall behaviour and personality, as well as many other qualities such as their self-esteem, intellectual qualities, emotional development, and so on. This is particularly true for boys.

After all, a father is usually believed to be a child’s perfect ideal, someone they look up to and admire and, in the case of boys, aspire to be. Hence, he usually tends to be someone the child will learn the most from.

Despite this, it often seems that fathers aren’t valued as much as they should be. Just because they don’t speak to you as frequently as a mother does, or don’t even always ask you about little matters, doesn’t mean they care less.

It’s just that they like to focus on the bigger things, things that will probably ultimately matter the most in their children’s lives. Hence, they should be equally treasured and valued, as well as respected and loved for everything they did or are still doing.

How to make Father’s Day special?

Fathers work their whole lives to make their children’s lives special, so it’s not much to expect the children to make at least one day in a year special for them. However, as not everyone may be creative enough to come up with some unique ideas of their own, here are a few suggestions almost anyone can consider for making Father’s Day special for their fathers:

Let them relax as much as they want to!

You may find it to be obvious or silly even, but it’s actually a wonderful way to ensure that your father feels happy about the day. A father usually has to work hard at his workplace and carry a lot of pressure on his shoulders, both from work and from all his other responsibilities too.

Even during holidays, there are always things that need doing. From fixing things to looking after the chores, all cause a bit of hassle in his life, especially if they need to be done when he’s supposed to be on a holiday.

So it’s a great idea to avoid putting any extra pressure on him, not even trying to make the day very special, perfect or memorable. Simply let him relax and feel comfortable. At first, anyway!

After he’s done with having enough time to himself, however, you can consider moving on with your other plans.

Getting your whole family involved

There are probably a few things your father likes a lot, and one of them is likely to be spending quality time with his family.

So a good idea is to simply plan a lively family gathering, or maybe even going out on a walk, going to some quiet place and having a long healthy family conversation, maybe going out for a family meal, and so on.

This is something that can actually make the day really special for your father. You can talk about all the things you remember about your childhood with your father, in which he was involved – all the great memories you have that he played a big part in creating.

This is sure to bring a smile to his face and maybe make him feel a bit more lively and involved. It will definitely make him feel good about himself!

Think buying a nice and expensive card from a card shop will be enough to show how much your father means to you? Well, not if you intend to make Father’s Day really special for him.

A purchased Fathers Day card, regardless of how nice it is, may not touch your father’s heart as much as a not-so-good-looking but lovingly handmade card would. It really is the thought that counts in this case!

A father is usually never showered with appreciation, nor is he used to being so. However, as it’s a special day for him, you can take extra time to appreciate all the things he does for you, and let him know that you do so and how much he means to you.

This should make him feel that his efforts are being valued and recognized, and even strengthen your relationship with him.

Buy him a special gift

It’s all too easy to get your father a jumper or some socks, or just the same old present you usually get him on Father’s Day.  However, to show him you really appreciate him, take the time to choose a truly special gift that will mean something to him.

It doesn’t necessarily have to be an expensive gift, just something unique and memorable.

We have a great range of Father’s Day gift ideas here, for example the Dear Dad, From You To Me journal is an inexpensive gift that any Dad would truly appreciate and get value from.

Whatever you choose to buy or do for your father on Father’s Day, just make sure he knows how much you love and appreciate him! That’ll mean more to him than any physical gift you might buy him. And if you’ve any other suggestions for making his day special, please do share them in the Comments below.

If you’re interested, you can read more about the history of Father’s Day here. 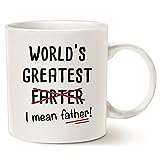 For more great gift ideas for special occasions, have a look through these popular links:

Our goal is to make your shopping experience as simple and enjoyable as possible. While Amazon is a great online store, it can be a little overwhelming due to the sheer volume and variety of products on offer.

So here at TechEffect we take the time to find all the top-rated products and organize them into categories for easy shopping and provide in-depth reviews too. And you're not paying a penny more when shopping through us. We do get a small commission if you visit Amazon via us and go on to buy something, but that is never added on to the price you pay.

TechEffect is a participant in the Amazon Services LLC Associates Program, an affiliate advertising program designed to provide a means for sites to earn advertising fees by advertising and linking to Amazon.co.uk, Amazon.com and other Amazon websites.